A radio programme inspired by the project was aired on BBC Radio 3 on the 3rd January and was Pick of the Day in the Radio Times!

You can listen to the programme online here (best listened to with headphones).

‘Following the Flight of the Monarchs’ brings together artists, scientists, and conservationists to connect ecosystems and communities along the migration routes of monarch butterflies as they travel the 3,000 mile journey between Mexico and Canada each year. Rob Mackay is a composer and sound artist based at Newcastle University in the UK. He is passionate about building links between art and science, and how we can draw connections to the natural world we are all a part of through sound and music.

In collaboration with Grant Smith at Soundcamp and local partners, two streamboxes have been installed at either end of the monarch butterfly migration routes between Canada and Mexico. The boxes livestream the soundscapes of these different ecosystems via the Locus Sonus Soundmap.

The first of the streamboxes was successfully installed in the Cerro Pelón UNESCO monarch butterfly reserve in Mexico in 2018, and a subsequent streambox was installed at Point Pelee National Park in Canada in 2019 . The streams are being developed for ecosystem monitoring as well as integrating into artworks which are raising awareness of the issues the monarchs face, whose numbers have declined by nearly 90% over the past two decades.

The streamboxes are still in their pilot stage, and we eventually hope to create a network spanning the Eastern and Western migration routes. We are still working to tweak the technology for consistent operation and streaming – so if you try to listen and can’t hear anything, please try again another time! 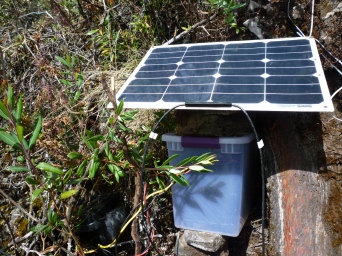 This is a recording from the streambox we installed in the Cerro Pelón UNESCO Biosphere Reserve and Monarch Butterfly Sanctuary in the State of Mexico. The streambox is a weatherproof box containing a Raspberry Pi processor with audio interface and 2 microphones linked to a 3G cellular network, all powered by solar.

Thanks to ornithologists Jorge Schondube Friedwold, Adrien Ceja Madrigal and Elisa Maya Elizarras of the Universidad Nacional Autónoma de México, who have identified the following birds on the stream from this recording:

This streambox is installed at Point Pelee National Park which sits on the shore of Lake Eerie in Ontario. It is the main migratory point in Canada where monarch butterflies start their winter migration south to Mexico.

Please sign up for our newsletter here to get updates on the project and how you can support it. We’ll get in touch periodically to tell you about new developments, citizen-scientist opportunities, and other ways to get involved from wherever you are.

We are working with partner organisations at the different migration sites to set up a donation scheme which can help to support the ongoing maintenance of the streamboxes as well as the important work being done to protect the monarchs’ habitats at these sites.

Led by composer and sound artist Rob Mackay at Newcastle University in the UK, the project connects with the international BIOM project and Soundcamp to map the changing soundscapes of UNESCO Biosphere Reserves through art, science and technology.

We are proud to be working with local partners at each of the migration sites above. Here is a list of partner organisations:

We have also gratefully received funding from these organisations helping to support the project so far:

Several artistic responses have been created so far: An immersive audiovisual installation; live audiovisual performances with artists across different locations; several pre-recorded performances within the reserves; and a radio programme for BBC Radio 3’s Between the Ears broadcast on 3 January 2021. Future artworks include virtual reality installations incorporating 360-degree video and ambisonic audio.

Artists, scientists and conservationists involved with the project so far include:

Monika Maeckle at the Texas Butterfly Ranch wrote a blog post about our Mexico fieldtrip in 2018, complete with photo documentation and a link to the live stream on the Locus Sonus Soundmap.

Here’s some documentation of the installation we made in 2016, ‘Flight of the Monarchs’:

We have been developing a live audiovisual networked performance linking several performers in different countries with real-time livestreamed soundscapes from monarch butterfly reserves along their migration route, and have performed it online at several international festivals (Seeing Sound Symposium; Music Studies on a Damaged Planet; Vibrant Practices; BEAST FEaST).

‘Networking the Flight of the Monarchs’ (audiovisual telematic performance) – Soundscapes from monarch butterfly reserves in Canada, Mexico and the USA are live-streamed from open microphones installed by Rob Mackay in 2018 and 2019, and blended with improvised performances networked in real-time from California (David Blink – handpan/trumpet); Mexico (Rolando Rodriguez – poetry); Canada (Jessica Rodriguez – video); and Leeds (Rob Mackay – flutes and computer).

Inspired by Teressa Conors’ creative practice, “ecological performativity” enacts a non-anthropocentric model, characterised as the dance of agency between living and non-living systems, human and non-human actors, and the complexity within which they are entangled[1]. This model stems from the premise that artistic practice enables different perspectives of the world and becomes an apparatus for change, promoting what we consider “a long overdue ontological shift in the way we exist in the world”[2].

In this performance, multiple spatialities and temporalities are layered together, creating connections between past, present, and future, as well as multiple webs between human and non-human participants, weaving together in a dance of agency. The intended effect is a kind of ‘telephenomenology’, building a sense of connectedness, embodied knowing, and empathy.

[1]  Connors TM. 2015. Audiovisual installation as ecological performativity. In: Proceedings of the 21st International Symposium on Electronic Art (ISEA2015). Vancouver: ISEA. [Also published as a PhD at The University of Waikato.]

And here’s a presentation that Rob Mackay gave at the Ecoacoustics Congress in Brisbane in June 2018: